ArtBox
a collaboration between i45 and Possible Futures
presents “Convergent Frequencies”
September 17, 18 & 19 | 6 pm – midnight
Musical performances each night at 9 pm.
Free  & open to  the  public.
Located at the intersection of Krog St and Lake Ave/Irwin St.

Whitespace and the galleries of i45 are pleased to announce “Convergent Frequencies”, a site specific art installation commissioned by ArtBox, a collaboration between i45 and Possible Futures.  The event will take place at the intersection of Krog Street and Irwin Street/Lake Avenue, where three local artists – Matt Gilbert, Matt Haffner & Nat Slaughter — will reinvent the empty lot with three large shipping containers using images, film, and sound, while simultaneously celebrating the surrounding neighborhoods.

Each evening at dusk, media artist and designer, Matt Gilbert, will present his new video inspired by the modularity of the brain’s vision system and the similar separation of color and movement in digital video.  Matt Haffner’s contribution will be a series of narrative portraits applied to the exteriors of the three shipping containers.  His silhouetted figures play out scenes with a background of Urban iconography that relates specifically to the Inman Park, Old 4th Ward, Little Five Points area that both he and the works inhabit.  Artist and designer, Nat Slaughter will convert the interiors of containers into a series of sound installations of binaural field recordings gathered from walks around Old Fourth Ward, Inman Park and the spaces in-between.

i45 is a gallery collective from Inman Park, the Old Fourth Ward and Little Five Point that includes Barbara Archer Gallery, Henley Studios, Wm Turner Gallery and Whitespace.
Please click on the link to see the recent Creative Loafing article by Wyatt Williams: ‘Convergent Frequencies’ transforms the corner of Krog and Irwin streets. A pop-up gallery made of 4-ton steel shipping containers? We’re not making this up.

Featuring work by Julie Püttgen, JS van Buskirk, James R. Carlson, and Matt Gilbert, the multimedia collaboration Unless & Until “…tells the story of Unless and Until, two creatures of indeterminate gender and rich acquaintance, who are returning to the pleasures of domestic existence, while attempting to remember the details of a fantastical journey they have largely forgotten.  On another level, the project is a celebration of the act of creation & the experience of revelation.” (Julie Püttgen)

For more about the project, please click here. The exhibit is currently on view in the Whitespace gallery until June 19th.

Currently on view in the gallery is Unless & Until, a multimedia collaboration between Julie Püttgen (paintings), JS van Buskirk (text), James R. Carlson (music) and Matt Gilbert (video). 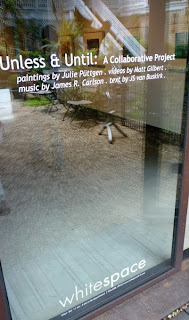 Evolving from a series of narrative, pictorial paintings to story lines and songs with the addition of animation, Unless & Until is the result of a collaboration in chance and friendship. A recent conversation with the artists illuminated the creative process behind their work. 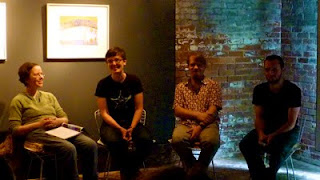 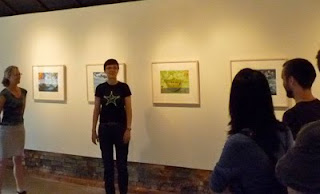 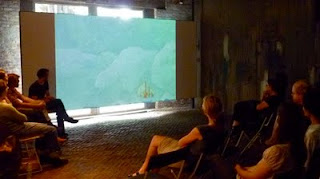 Annotated screening where the artists explained the evolution
of each chapter of the animated book version of the pictorial narrative.
Exhibition is through June 19th.
The book, CD & DVDs are available for purchase at the gallery.
Gallery Hours: Wednesday – Saturday
11 am – 5 pm or by appointment.

UNLESS & UNTIL ~ a collaborative project
Paintings by Julie Püttgen. Videos by Matt Gilbert.
Music by James R. Carlson. Text by JS van Buskirk. 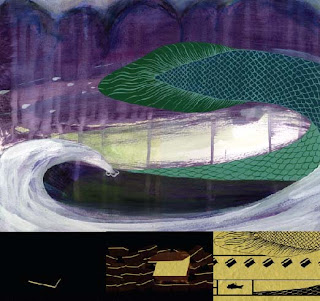 The exhibit Unless & Until has evolved as the result of a collaboration in chance and friendship.  In January 2008, Julie Püttgen created a series of paintings on paper called Cloudmapping.  Each painting began as loose, chaotic washes of color, into which she would gradually “read” a narrative, pictorial space.  After about six paintings, Julie realized there was a story linking the paintings together that needed to be written.  She contacted her childhood friend, Stephanie Paulk (JS van Buskirk), to construct the narrative, write the text and compose the lyrics. During this process, Julie agreed not to read the story in progress until she had completed the twenty-four paintings in the series.

Around the same time, Julie’s friend and colleague, Jim Carlson, saw the paintings, heard about the collaboration and offered to compose music based on the text.  Meanwhile, Julie created the prelude animation as a way to bring all the other elements together.

Realizing that animation was the necessary next step in the project, Matt Gilbert became the last addition to the crew as digital animator, pushing the definitions of the project far beyond what had been imagined possible.