“Duets,” curated by Anne Lambert Tracht for the Gallery Walk at Terminus, is now open.  The show looks at the way artists portray different relationships between two people and the stories that in turn play out before the viewer.  Make sure you END_OF_DOCUMENT_TOKEN_TO_BE_REPLACED 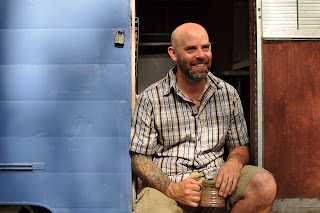 Exhibition: September 9 – October 15, 2011
Artist Talk: Thursday, October 13 | 6:30 PM
Join us for an artist talk with Matt Haffner tonight at 6:30 PM.  He will discuss his current exhibition at whitespace, “Just Across the Tracks.”  The show consists of a series of photograph portraits, sound recordings, collage works on paper, and a rotating diorama viewed through a camera obscura.  All of the pieces depict life in the space between the city and the suburbs with references to Haffner’s personal experiences.

Matt Haffner currently resides in Atlanta, Georgia with his family.  In addition to working on his art, Haffner is an Assistant Professor of Photography in the art department at Kennesaw State University.  He was originally drawn to street art, since he enjoyed the danger, the giddiness of getting away with something, and the ability to create work on a large scale.  He has since moved away from street art, but he still uses wheat paste, markers, vinyls, stencils and other street art tools for his current work.  Haffner has exhibited his art both regionally and nationally.

September 9 – October 15, 2011
Opening Reception:  Friday, September 9 | 7 PM – 10 PM
Whitespace is pleased to present Just Across the Tracks, Matt Haffner’s first solo show at whitespace gallery.  The exhibition consists of a series of photograph portraits, sound recordings, collage works on paper, and a rotating diorama viewed through a camera obscura.  All of the pieces depict life in the space between the city and the suburbs with references to Haffner’s personal experiences.
Talking to strangers is the central theme for the collage of portraits covering an entire wall in whitespace gallery.  Haffner sought out his subjects in the streets of Atlanta, engaging with the people around him instead of ignoring those passing by as they made their way through the city.  He used an older style camera with large film that took a few minutes to make an image. This afforded him the opportunity to start brief exchanges with these individuals while photographing them. This engagement sometimes opened people up to a conversation and to sharing surprising things about themselves. While taking the portraits, Haffner also made sound recordings that play within the gallery. Hearing the stories that his subjects shared and seeing this huge wall of portraits makes one look for the face that told the story. Haffner considers this the most honest work he has made to date.
ArtBox
a collaboration between i45 and Possible Futures
presents “Convergent Frequencies”
September 17, 18 & 19 | 6 pm – midnight
Musical performances each night at 9 pm.
Free  & open to  the  public.
Located at the intersection of Krog St and Lake Ave/Irwin St.

Whitespace and the galleries of i45 are pleased to announce “Convergent Frequencies”, a site specific art installation commissioned by ArtBox, a collaboration between i45 and Possible Futures.  The event will take place at the intersection of Krog Street and Irwin Street/Lake Avenue, where three local artists – Matt Gilbert, Matt Haffner & Nat Slaughter — will reinvent the empty lot with three large shipping containers using images, film, and sound, while simultaneously celebrating the surrounding neighborhoods.

Each evening at dusk, media artist and designer, Matt Gilbert, will present his new video inspired by the modularity of the brain’s vision system and the similar separation of color and movement in digital video.  Matt Haffner’s contribution will be a series of narrative portraits applied to the exteriors of the three shipping containers.  His silhouetted figures play out scenes with a background of Urban iconography that relates specifically to the Inman Park, Old 4th Ward, Little Five Points area that both he and the works inhabit.  Artist and designer, Nat Slaughter will convert the interiors of containers into a series of sound installations of binaural field recordings gathered from walks around Old Fourth Ward, Inman Park and the spaces in-between.

i45 is a gallery collective from Inman Park, the Old Fourth Ward and Little Five Point that includes Barbara Archer Gallery, Henley Studios, Wm Turner Gallery and Whitespace.
Please click on the link to see the recent Creative Loafing article by Wyatt Williams: ‘Convergent Frequencies’ transforms the corner of Krog and Irwin streets. A pop-up gallery made of 4-ton steel shipping containers? We’re not making this up.