The exhibition, Abstraction Today, at the Museum of Contemporary Art of Georgia (MOCA GA) opened Friday night at 6:30 p.m. The most prestigious and prominent art galleries in Atlanta compiled the artists’ works and the opening was filled with guests, a bar and merriment. Whitespace had the honor of participating in this collaboration with Alan Avery Art Company, Marcia Wood Gallery, Mason Fine Art, Sandler Hudson Gallery and {Poem 88}. With pieces from Pete Schulte, Ann Stewart, Bojana Ginn, Eric Mack and Seana Reilly, whitespace’s artists augmented the exhibition incredibly from wall paintings to 3D printed objects to sculpture. In conjunction with other artistic selections, the show was a congruent and diverse examination of what abstract art is in today’s contemporary world.

Though each artist presented their own negotiations of what it means to be abstract, the entire collection of art offered an exceptionally harmonious exhibition. whitespace artists in particular not only showed work that charged the white walls of MOCA GA, but also formed a coherent representation of the free-expression, intimacy, dialogue, and immersive environment whitespace strives to represent. The looming grace of Schulte’s wall painting alone overwhelmed the northern wall of one room, but reflected against the colorful and overwhelming wall work of Hense, added great contrast to envelop the night’s crowd. 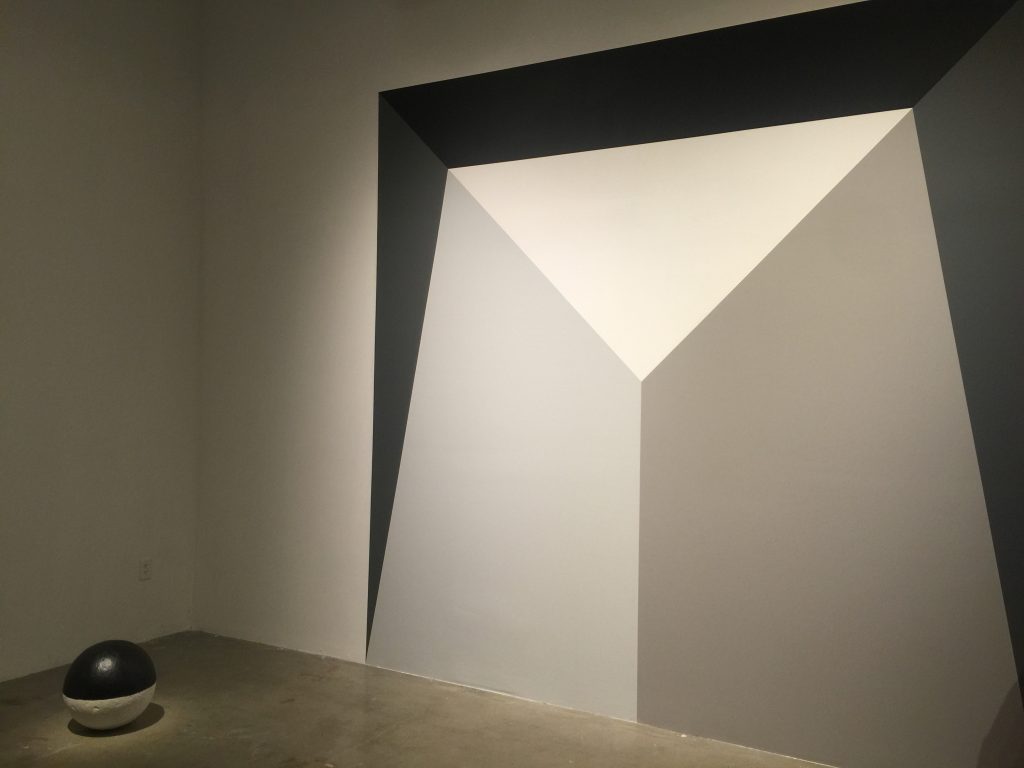 In a smaller room to the side, an installed projector and sculpture made of straws, paint and cotton by Ginn mirrored the pixelated, almost urban abstract landscape of Mack’s multi-medium work. Beautifully and breathtaking, Stewart’s 3D printed objects cast long and opaque shadows against the white walls of the space as one of the first works in view of the entrance of the exhibition. Across from Stewart, Susannah Starr’s large floral and vibrant neon cut-outs refracted the light via their own technique, presenting a delightful juxtaposition of shadow play for Stewart’s objects. And Reilly’s floor to ceiling canvases overwhelmed what was left of the room with their ombre and bleak exploration of gradient and texture. 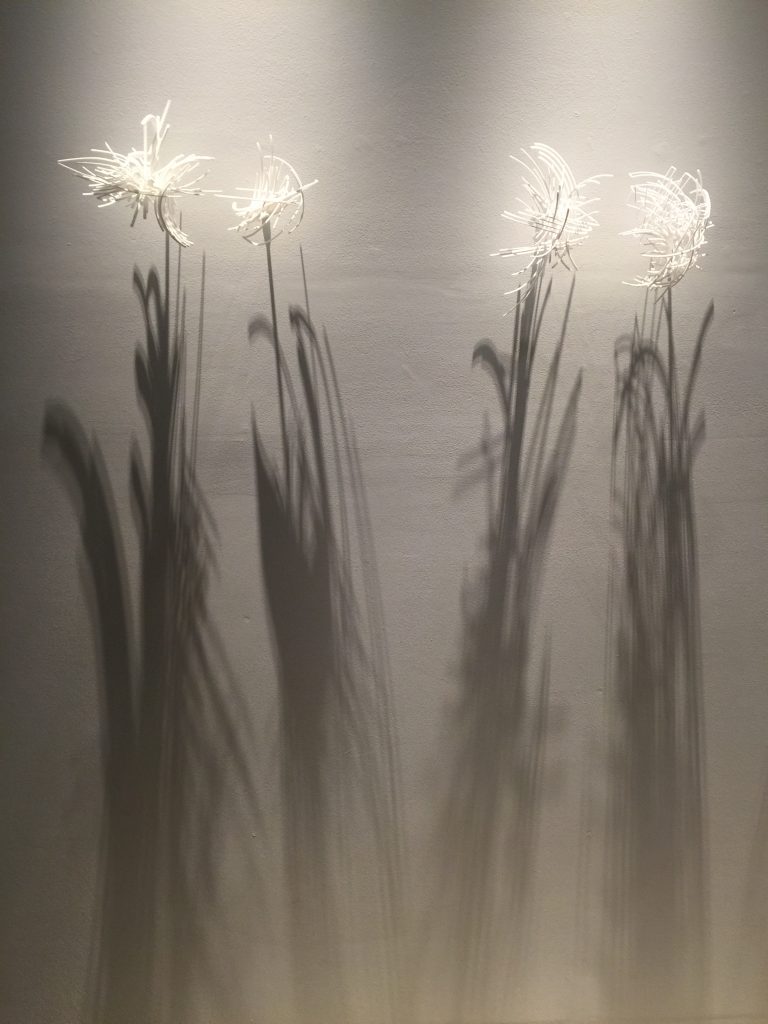 What was best about Abstraction Today was the physical manifestation of the diversity and talent that can be found in Atlanta. Each artist’s work illuminated an aspect of its neighboring pieces and vice versa. The space was filled with detailed conversation, immense artistic exploration and wonder. The exhibition’s navigation of what it means to be abstract is a testament to the greatness of today’s contemporary art, not only in the world, but right here in Atlanta. From modern advances in technology, projection and 3D printing, to wall-painting, traditional sculpture and manipulation of found objects, the exhibition is a beautiful tapestry woven by the many threads of experimentation, risk, exploration and abstraction today.

The artists in NOT BIODEGRADABLE employ plastics or petroleum-based products in their process, either referentially, materially or both. With the exception of one, the artists are from Los Angeles. Linked through their choice of materials, they share a passion for how the non-biodegradable can be manipulated.

Playfulness, exuberant obsessiveness and a love of color permeate their artwork. Each artist uniquely explores the capabilities of their chosen material. Whether plastic (which lasts hundreds of years), or petroleum (often wasted on fueling cars), the creative results suggest they may be better utilized in making art – then at least the art would endure forever.

Alison Foshee tinkers with pre-fabricated objects such as plastic pushpins. She is particularly interested in the dual nature of these consumable goods. Simultaneously indispensable and without value, they function in her work as a not-so-subtle metaphor for culture’s subjective definition of what is precious.

David Grant‘s sculptural rubber latex pieces are playful references to a subculture within the gay community known as “gainers”: prodigiously large men who intentionally overeat in order to gain weight and thereby increase their sexual pleasure. Their admirers measure beauty by their own standards, complete with “stars.”

Mery Lynn McCorkle‘s sculptural paintings are elegiac meditations on the beauty of the galaxy and its stars. Plastic in her work pays homage to an immortality that is not ours, but rather plastic’s ability to “outlast our bones.”

In his sculptures, Jon Rajkovich merges fabricated objects with past impressions and elements of imagination. While alluding to their earlier history, he continues an object’s life cycle by placing it within a different context, where it has a new point of departure.

For over a decade, Shirley Tse‘s installations, sculptures and photographs have engaged the philosophical implications of plastic as a phenomenon: transience, mobility, mutation, multiplicity and conflict that defines our contemporary society. “The context in which plastic is seen calls for a dilemma between its phenomenological and semiotic significance. I realize plastic is more than a substance, it is a formula. It is a code. In our world, it becomes a site. A site that is physical, semantic and sociopolitical all at once”.

Below are links to recent reviews on our current exhibit, Seepages, curated by Caroline Lathan-Stiefel. We hope you will be inspired to see this engaging and thought-provoking group show. 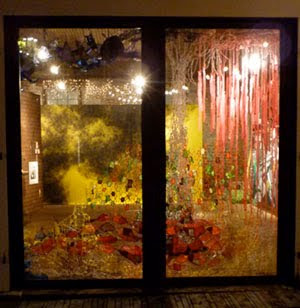 We had a great time last Saturday evening, going all out with hot apple cider to a merry bonfire. Thank you all for coming out to see the December Show and the For-Ever-Green in its full night time glory. Candles lit along the edge of the garden, marshmallows toasted in the fire, and roaring crowds warmed up to the sip of extra “butter” in our cider.
Watch out for the invitation of our closing reception in January! Let’s continue the festivities well into the new year.

And on that note, feel free to wander into Whitespace garden in the weekend evenings! Whitespace will keep the lights on for Thursday, Friday, and Saturday nights until 9pm until the show ends January 10th. Enjoy! 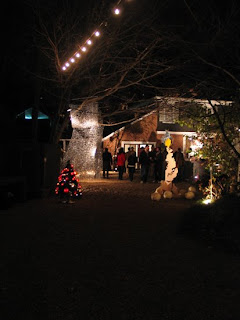 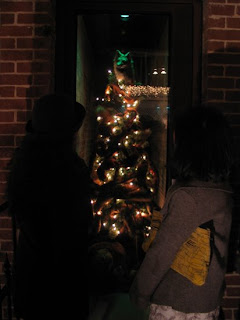 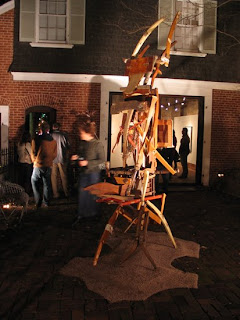 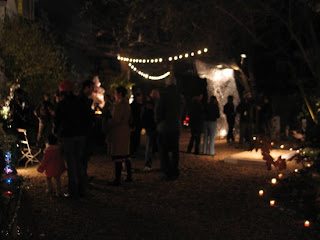 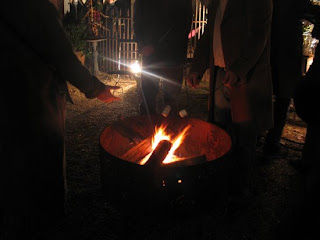 S’mores are in order 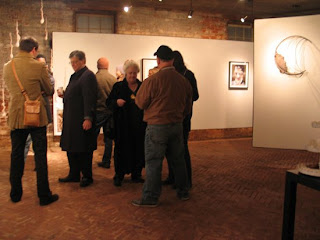 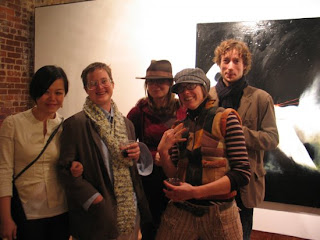 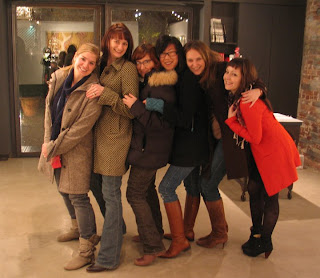