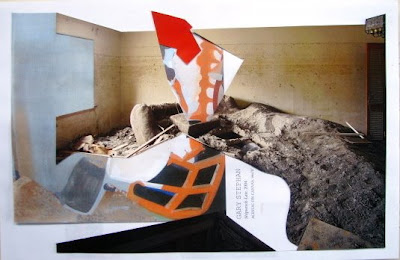 John Otte, is well known in Atlanta as an artist, DJ, and curator. His multi-disciplinary work is primarily abstract, containing numerous references to the body, music, architecture, and landscape.

SUMMER FALLS is set to take place in just a couple of weeks when Summer slowly begins the process of giving way to Fall. In this temporary “hit & run” installation, John Otte seeks to meditate on the ongoing collapse and erosion of many previously considered “stable” systems, both locally and globally, thus making way for other arrangements and different forms. In an ongoing exploration of creative destruction, Otte employs photography, text, collage, sculpture, and film sources creating porous abstractions where systems collide, contaminate, and overlap one another, forming strange new hybrids and mutations – an uncertain world where fact and fiction are inextricably bound, “beautiful things grow out of shit . . . things evolve out of nothing,” and “everything disappears.”

+ 2 FILM SCREENINGS
* Selected films for screening will be announced shortly. Check back with us soon!

One thought on “SUMMER FALLS”