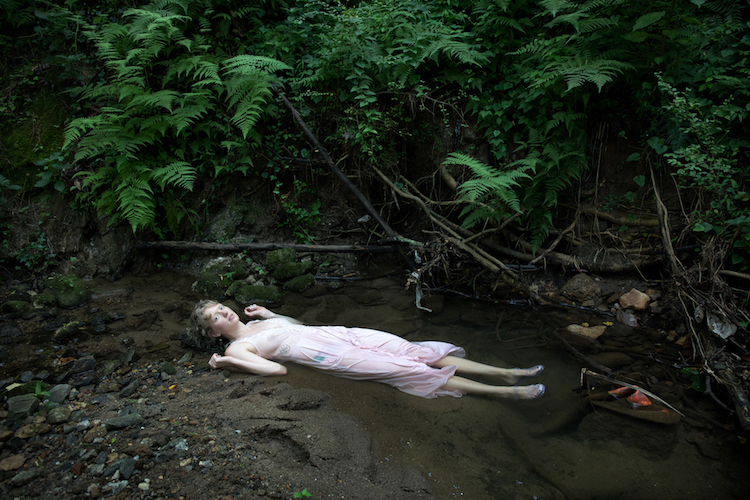 Walking through the exhibit, Hortophilia, at Whitespace Gallery, is like meandering through the woods and stumbling on the unexpected. A woman floats in a shallow stream, eyes looking through you, the mark of a circular tattoo showing through her paper-thin sheath. A clump of roots drips from the ceiling, grasped by two crystallized hands. At the light-infused grotto floating with lavender water lilies, is it your imagination or does a fairy dance at the darkening edge? Further into the show, two women embrace in the shadow of a rocky outcropping, looking up to muse on why you, the viewer, are here.

These images tap into something primeval and wise, visceral and ethereal, fierce and tender. You exist outside the frame, a voyeur. But as you immerse yourself, you become an extension of the setting. You can smell the fecund earth under the velvety moss, under the sturdy trunk, under the swaying leaves of the giving tree.

Neurologist and author Oliver Sacks defined hortophilia as the desire to interact with, manage, and tend to nature. “The effects of nature’s qualities on health are not only spiritual and emotional but physical and neurological,” Sacks wrote in his essay collection, “Everything in its Place.”

Photographer Charlie Watts presents a visual interpretation of hortophilia through photography that taps into the spiritual, emotional, physical, and neurological. These photos combine a ripe beauty full of light and tinged with darkness. A quality of otherworldliness murmurs throughout this work, which the artist explicitly describes as “a stepping stone to the unknown realm just past the peripheral edge of consciousness.”

Like previous subjects Watts has taken on, Hortophilia continues her exploration of the interconnectedness in female relationships and a physical connection to the planet. In her previous show, The Throwaways, Watts presented visual allegories of the sex trafficking industry in photo-collage lightboxes, calling attention to the desecration of the trafficked women and the destructive environment in which they were forced to exist. In Just Beyond the Peripheral, Watts focused her lens on women in natural settings that one reviewer described as “lyrically realistic but vaguely disquieting.” Her series, Honey or Tar, honed in on the collapse of honeybee colonies through representations of women—bound in mossy ropes or wearing only a beekeeper’s hat and veil—as totems to protect the bees. In Hortophilia, Watts extends her newest invitation to meditate on the earth and our connection to it.

As an editor, I am the person Charlie Watts sometimes reaches out to when she’s searching for the right words to articulate her vision. As an art collector, I am lucky to have many of her photographs, paintings, and sculptures throughout my home. And as Charlie’s mother, I have witnessed her visual intuition from her earliest years. Minutes after she was born, her face just inches from mine, I said, “Hey, baby,” and her big, deep pools of eyes popped open. I swam into them, and these thirty years later, I am swimming still. Charlie Watts continues to help me “see” the bigger picture.

Just days before this installation of Hortophilia at Whitespace, I watched my artist daughter assemble the prints in frames. One would need to be reprinted, she decided. The color was slightly off. She wondered aloud about where to place the images in the gallery to invoke the most powerful effect. She hoped the tree roots carefully excised from a North Carolina mountainside would add to and not distract from the works on paper. At the opening, I watched a group that clustered around one of her photographs, mesmerized by the young woman who lay face up with eyes closed in a dry creek bed. Above, other women scampered up a leafy hillside, their backs to the camera. The viewers were silent as they studied the photograph, having no need for words as they momentarily saw through the eyes of Charlie Watts. They had just followed the artist into an unknown realm just past the peripheral of consciousness. 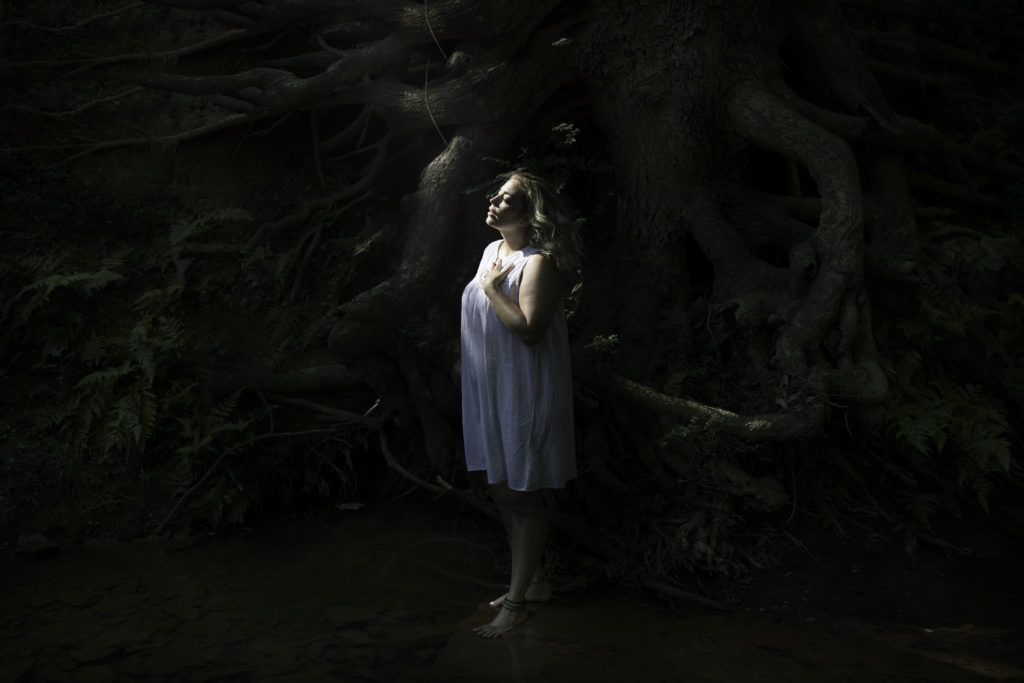