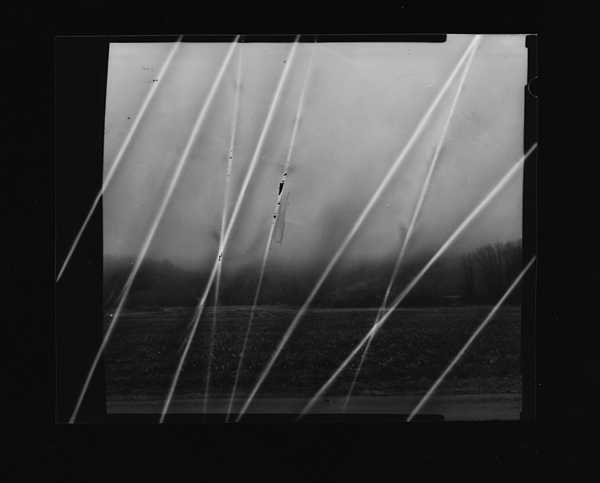 “And With The Pain The Fog Clears,” 10 x 10 inches, gelatin silver contact print

The world of Stephanie Dowda’s new show at Whitespace, Traces, is one irrevocable. Traces is divided into two acts: 33 Marks and Evoco, a conceptual decision perfectly suited to the halved space of the gallery. Traces itself has an inherent twoness, or, perhaps more accurately, an inherent simultaneity. Its photographs are both formally conservative and yet strikingly manipulated; it is both corporeal and necromantic; it is both present and nearly vanished.

Dowda’s project was composed in both Vermont and Virginia but singularly in the aftermath of a long event: the illness and death of Dowda’s mother. But nowhere in Traces do we see an explicit nod to disease, death, or even burial. It is only alluded to in Dowda’s artist statement. Instead we see a world irrevocably marked by loss. I use the verb “marked” consciously. The first room of the gallery is devoted to 33 Marks, the section where Dowda privileges the photographic negative as its own object. During her process, Dowda would fold or deface the negatives before using them in the shoot. The result are silver gelatin prints of pastoral scenes marked by blinding, lit folds—the dark, square object contained tightly in a white frame. At its most dramatic, the object seems mutilated; at its most neutral, it is simply altered.

In Evoco, Dowda has unprecedentedly reintroduced the eighteenth-century Claude glass. Named for the French landscape painter Claude Lorrain, these small, convex mirrors were painted dark so as to diminish and abstract light, and thus were rich instruments for painters. The Claude glass has the unique quality of permanent distortion. Dowda’s Claude mirrors hang against the surface of her large prints, which in Evoco are indecipherable forms captured. Many of them are not traditionally framed, but are held by glass hooks—the prints gently levitating before the wall, occasionally pressing against their restraints with a cycle of air or a body passing. How unexpectedly Dowda gives us access to her changed vision. She enters the invisible as if it was always meant to be seen.

Stephanie Dowda’s Traces will be at Whitespace until February 11.