Ann Stewart’s opening for Causa Sui drew a delightful crowd to whitespace gallery this past Friday. The weather was warm and as the temperature cooled, the heat of the day faded into a comfortable summer evening for all who attended. Guests flowed from room to room to gaze upon Stewart’s three-dimensional objects and graphite etchings and the conversation hummed as visitors observed her work. Stewart’s collection is entirely enthralling; the geometric forms of both styles of her work visibly inform one another creating a beautiful cohesiveness to the space.

Her 3D objects are suspended in transparent cubes in each room of the gallery so guests are able to closely examine them from all angles, an interaction that pulls the viewer into the installation, informing a more detailed understanding of the work. This kind of interaction is necessary in order to fully appreciate Stewart’s objects: their intricate facets, incisions, slices, edges and protruding planes are incredibly small and exact. Stewart creates her objects with a 3D printer. A unique process (see detailed explanation here https://www.youtube.com/watch?v=qCThfUhVftw) involving computerized images of the objects before they are printed. This process also mirrors the title of the show, Causa Sui. The term causa sui is Latin for “cause of itself.” Once Stewarts prints an object, it creates itself. 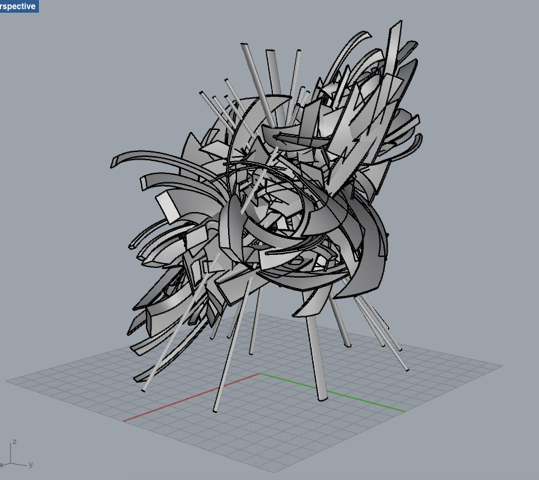 Her objects and drawings all operate employing a centrifugal force, gaining their momentum from central forms. Her objects coil or protrude outward in complex patterns and her drawings employ a similar format, utilizing negative space in tangent with their faux symmetric geometry. The largest piece in the center of the main room of whitespace, entitled “Oscillator” is beautifully drawn and shaded, maze-like in its geometric imagery. All her drawings are black and white and collapse the distance between figure and ground resulting in an illusionistic experience for the viewer. The drawings come to fruition through their nearly 3D appearances. Oscillator inhabits the same room as three of the largest 3D objects entitled “Sight Path,” “Sui Genesis,” and “Big Bang Baby.” One can see the influence of Stewart’s particular style upon these four large pieces.

Stewart’s practice of pattern recognition and pattern generation in the creation of the objects and etchings is an effort to negotiate the relationship between randomness and structure and investigate the visualization of perception. As viewers flanked the objects, leaning in to get a closer look examining the pieces’ precarious and convoluted forms, this negotiation was facilitated in a physical space and a deeper understanding of how the objects operated was fostered. 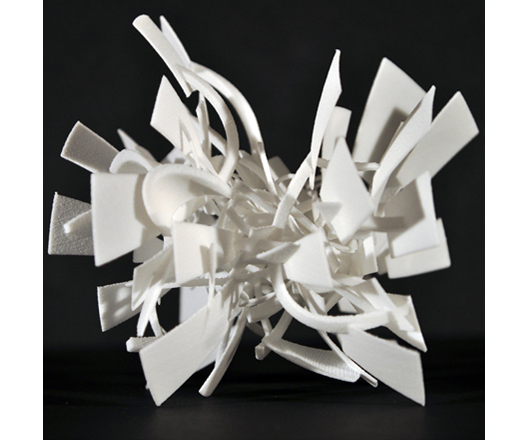 Along with Stewart’s work, whitespec featured a new artist as well, Geewon Ahn. Her body of work titled Between Absence and Presence drew the crowd’s attention as well. Made from cable ties entirely, Ahn’s work extended beyond the space of whitespec into the courtyard. Three of her sculptures inhabited the space along with the evening’s visitors. Otherworldly in their forms, Ahn’s work complemented Stewart’s objects quite beautifully. In an examination of loss and memory, Ahn navigates the relationship between form and negative space as well, creating pieces that necessitate close inspection and interaction. Her pieces are rounded in nature, some of which made up of components that protrude into the space of the viewer. Balanced by the work of Stewart, Ahn’s pieces created an engaging and invigorating experience for all who attended. 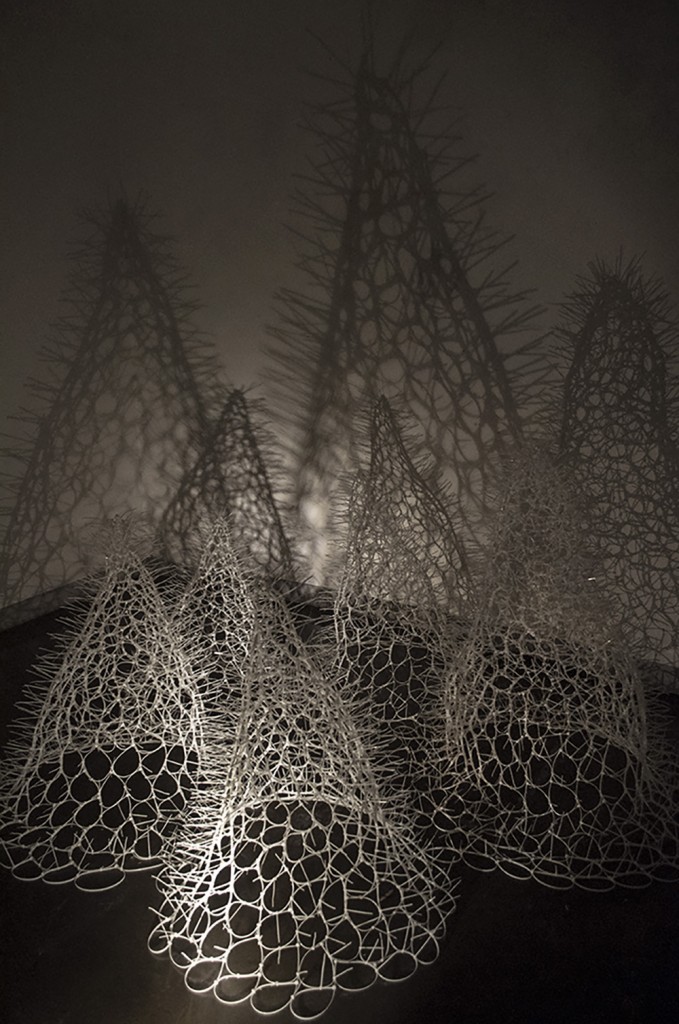