This past weekend, Constance Thalken’s artist talk proved to be engaging, thoughtful and thorough as she explained her latest body of work, “Eyes Open Slowly.” The show consists of photographs of taxidermies mounted on archival print and framed; many of them appear to be almost three dimensional in their incredible detail. Thalken explained that she spent two years visiting the taxidermy shop where the images were captured. The shop provides taxidermy pieces for a nearby Longhorn restaurant and is often busy, running on a very disciplined schedule in order to complete the many tasks at hand. Thalken came to start photographing the animals at the location after she had taken a class to visit on a field trip. She said that after this initial excursion she knew she needed to go back. Something about the shop’s environment sparked her interest and creative eye. Thalken came to admire and appreciate the care the shop owners paid to the animals that came into the shop. As a result she formed a very close bond with the shop owners and the relationship that blossomed became key in her creation of the works. 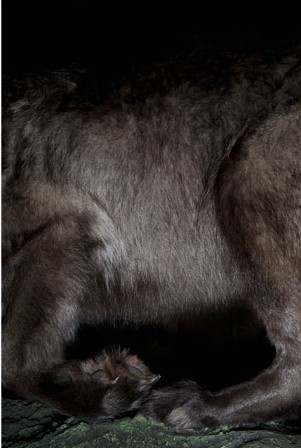 When one listens to Thalken elaborate on a piece, it is easily discerned that respect is of the utmost importance for her as an artist. Her relationship with the shop owners serves to indicate the level of carefulness Thalken exemplifies when entering and visiting another’s space in order to photograph it. She is quite knowledgeable when it comes to taxidermy as well, describing for the audience some of the practices that go into the preservation of the animals.

But beyond the scientific details of the works, Thalken explains that the premise of “Eyes Open Slowly” stems in part from her intrinsic interest in animals in terms of the drives they share with humans, as well as her admiration for nature and its creatures. While she is interested in examining the preservation of the animals’ lives, her exploration of death, as a common destiny between all living things, is also key. Her works reference sacrifice, love and closeness while ultimately and simultaneously citing death. That is what is most interesting about Thalken’s show, there is an intimacy between viewer and photograph, one that forces an examination of beauty and fabrication, respect and admiration and yet, there is also an inherent reference to death: one that is almost inescapable when viewing her works.

Despite the morbidity of this reference to death, there is a kind of reverence to her work, not only in terms of the taxidermy practice, with its delicate treatment and preservation of the animals, but also in terms of Thalken’s photographic practices. Her photographs highlight the gentle manner in which the animals are treated and act as relics of the animals’ sacrifice found in death. The animals in her pieces are posed in noble positions and become subjects of admiration and wonder, in spite of the deaths that had to occur in order for them to exist in the taxidermy shop. 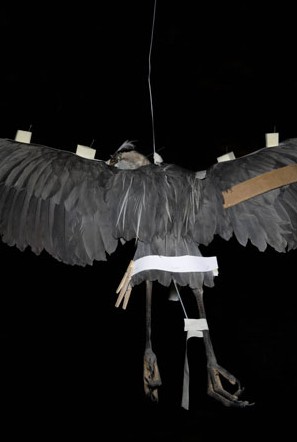 Ultimately, the pieces invite viewers to confront their own ideals about taxidermy and what it means to preserve the nature and life around us. The animals are reconstructed in ways that adhere to human needs. They are made to look soft or regal, and yet the works are embedded with death; an aspect that forces the viewer to also come into contact with ideals about mortality and what it means to be alive. This oscillation between life and death, respect and sacrifice and finally the process of preservation, is what allows Thalken’s pieces to achieve their power. The viewer is placed in a position to appreciate, the animals and their sacrifices and also deeply contemplate, on a spiritual and transformative level, what it means to observe death, loss, life and conservation.