We thank all who came on opening night, and have come in since, to view Mimi Hart Silver’s Dead of Night. If you have yet to experience the show, there are still two weeks left to see her acclaimed first solo exhibition at whitespace. We also invite you to join us for an afternoon closing reception and artist talk with Mimi on Saturday, July 27th. Stay tuned for details!

We’re thrilled to add Mimi Hart Silver to our fantastic roster of whitespace artists!  We sat down with Mimi to learn more about her life and work – read on and get to know this young Atlanta artist:

whitespace: We’re thrilled to add you to the whitespace roster and to introduce you and your work to the Atlanta art community and beyond.  Can you tell us a bit about yourself and where you come from?

Mimi Hart Silver: Thank you. It seems like yesterday that I was a student at SCAD dreaming about a show at whitespace, so this is all pretty surreal. 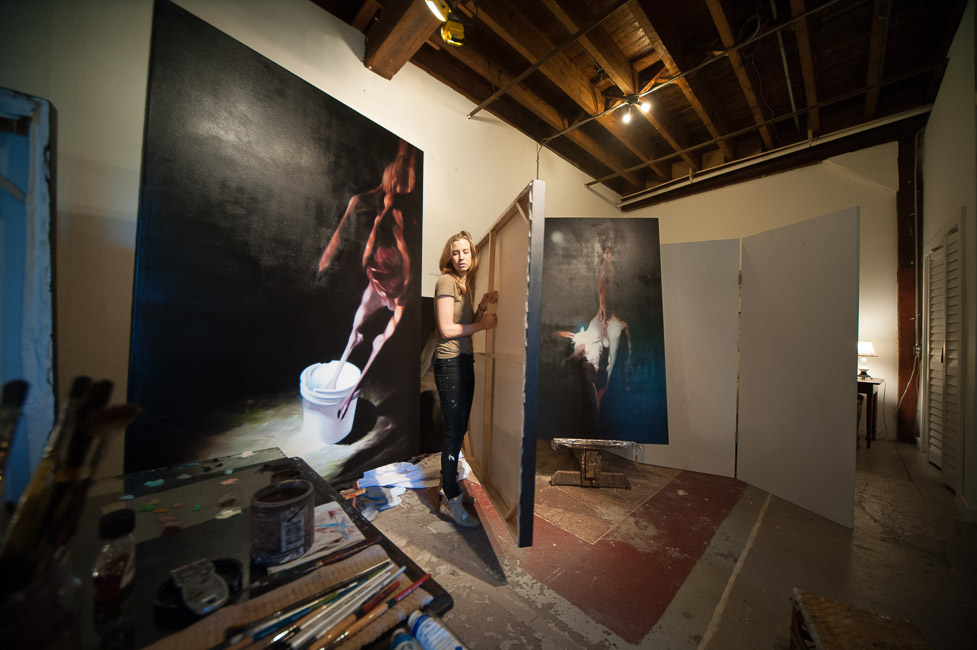 Mimi Hart Silver in her studio at the Goat Farm

I grew up on a string of barrier islands in North Carolina called the Outer Banks. It felt like the fringe or a frontier. Life and death seemed more apparent there because everyday life was shaped directly by the environment and the weather. It was impossible not to be effected.

The King of England granted my father’s family land in NC to start a plantation, however many years ago, and my mother’s parents were farmers that lived entirely off the land. They all came to NC from Europe on ships, and very few on either side of the family have lived outside the state since. Our homes are overflowing with antiques, heirlooms, and trunks full of documents and letters. My attempts to sift through the material and psychological baggage have lead to an increasing fascination with the tarnished veneer of Southern aristocracy.

When I was around ten, my father took up painting when an illness put him on bed rest, and soon after my mom opened a gallery to sell his work.

ws: Growing up in Outer Banks with two parents in art-related careers, did you feel pressure, expectation or objection to becoming an artist?  When did you know you wanted to pursue art as a career?

MHS: My mother always had an intuition that I was an artist. I was contrary to this, and can remember having a love/hate relationship with art making from the beginning. My father and I have a difficult relationship, and when he became an artist I had even more objection. I ran from him and myself for many years, and at some desperate moment realized how tired I was, and finally gave in.

I enrolled at SCAD Savannah for fashion. I was in the right place, but I wasn’t quite ready to take myself seriously. I soon learned just how serious the other students were and that fashion wasn’t for me. I called my mom crying one day after class to confess that I was an artist, and I was going to change my major. That was 2009.

MHS: Francis Bacon was a big inspiration to me during the beginning of this series. The way he modeled flesh as transparent and movable, and his religious symbolism. Anselm Kiefer is my favorite artist. His attempt to transcend his cultural and spiritual moorings resonates deeply in me, and the hugeness of his effort pores off his canvases. I also love Damien Hirst. He has a way of getting straight to the guts of human mysteries.

Southern Gothic literature drives a lot of my work, particularly William Faulkner. His writing is so esoteric, dark, and visual. The mix of lush prose and mangled dialogue makes me feel like I am crawling beneath the skin of the story. I can’t make out exactly what is happening, but I can feel it in my bones.

I can easily say that my family has influenced my work the most. I don’t know what I could talk about with more honesty or integrity than my own life. I think DeKooning said something like, “for inspiration, I reach out my arms.” My family members are the most tragic and beautiful figures I know. We share the same struggle.

My mentor at SCAD, Natalija Mijatovic, taught me almost everything I know about art making. From Serbia, she often told me I was Slavic on the inside. Natalija was the first professor that I really believed. I feel like half of this work belongs to her.

MHS: Oil painting and the glazing techniques I use were developed during the Renaissance, while my compositions can be suggestive of Medieval iconography. In both periods, art was largely commissioned for religious purposes. I nod to the technique of the masters, and question their work’s purpose.

I learned how to build stretchers in school, and have changed and adapted their structure so even the big pieces are light enough for me to move around by myself. I plan the composition and make a scale study on paper before I build the stretchers. I paint the canvas black with a grisaille underpainting. Then I glaze layer after layer of color on the underpainting to achieve the translucent 3D effect.

It is a consuming and painstaking process. I assumed when I graduated my work would loosen up some, and maybe reveal some brushwork, but it has only become more controlled and refined.

ws: Dead of Night is a series of paintings based on photographs you took of your brother flaying wild game. Why did you want to paint these often bloody and grotesque images? The end result is paintings that are at once beautiful and grotesque, dark and light, abstracted and anthropomorphic. Did you intend to highlight these dichotomies in this series or is it something that happened unintentionally or more organically? Is that unique to these paintings or something that is consistent with your other work?

MHS: The series developed organically, and that is what keeps me interested. The paintings are constantly evolving and revealing new truths and stories, both personal and universal. Sometimes I don’t believe I made the paintings, which creates a lot of anxiety. They are at once a complete mystery and a mirror of my perception. As I become aware of particular dichotomies, I manipulate them to better tell my story.

I was probably initially attracted to the skinning because it was grotesque or archaic or culturally significant, but when I observed the body through a lens it became something else- it became beautiful. The animal was killed long before it was skinned, but I felt I was recording the spirit’s exodus as each layer of flesh was peeled back. I was staring at the questions that had consumed me since childhood. What are we made of? And what happens when we die?

ws: How does your identity and experience as a southerner influence your work and to what degree or in what way(s) does your work play into or riff off of southern traditions – and more specifically, the Southern Gothic tradition?

MHS: My father, the blue-blood, comes from a long lineage of alcoholism and abuse. His family seems to have never recovered from losing the Civil War. I protested everything he stood for as a child, while I suffered from multiple illnesses, including hearing loss, which was probably necessary. I cannot say my illnesses were a direct result of his behavior, but the stress didn’t help. My need to gain some kind of understanding, and put my experience in context sparked my interest in Southern Gothic literature. The authors share my often dark perspective on the South, and human nature in general. In SG lit, trauma resulting in physiological disability is frequently used to personify deep immorality. The mangled bodies in my paintings express this sentiment.

I see remnants of the tragedy and decay, the belief systems, the clash of extremes, and the transcendental longings of the South everywhere…in my family, in the landscape, and in everyday rituals like skinning a deer.