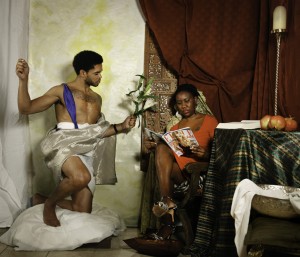 If the art markets are any indication, interest in Renaissance, Baroque and Old Master painting has spiked again.  With record-breaking auctions at Christie’s and Sotheby’s, its clear that collectors and dealers alike are betting on these works as appreciative investments, despite their age and content.  In addition to this market resurgence, more and more contemporary artists are looking back several centuries for inspiration. David LaChapelle, Kehinde Wiley, and Pierre et Giles have all reinterpreted iconic religious imagery in their sometimes controversial work; and, in whitespec at whitespace Rose M Barron’s “Multitude of Madonnas” similarly examines and reinterprets classical religious art, with a focus on the Virgin Mary.  We asked Rose to tell us more about her work and the particular influences for a few of the pieces in this series: 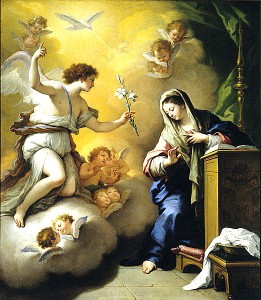 “‘Multitude of Madonnas’ is a series of tableaux that reference classical styles while also accommodating contemporary influences. I am re-constructing the imagery from its’ classical literal form, lending new meaning to the metaphors, symbols, religious iconography, and political content inherent in the late Renaissance paintings.

The referenced paintings portray Madonna as a flawless, thin young woman with softly colored, lengthy flowing mane, representing the Renaissance ideal of female value. The supporting cast, whether saints or angels, are all males – typical in Renaissance art as an extension of the rigidly patriarchal social structure and subsequent repression of women.  In Renaissance depictions of men maturing through the natural aging process, excluding women from the inevitable phenomena of nature.

‘Multitude of Madonnas’ distorts expectations of age, gender, sexuality, and culture in order to explore contemporary notions of womanhood. I use a different model for each Madonna to accentuate the diversity of women. The images portray my Madonnas as separate characters who are complex, personal human beings, each with their own wants, needs, and desires. The entire assortment of women range from the devout to the sexually mannered, dominated by fleshly, worldly tendencies.

I focus on sensuality, mixing contemporary issues into my images in order to represent the vast variety of ways women live today. The resulting compositions poke fun at the passive, demure women depicted in Renaissance art as well as, on a broader scale, a woman’s place in Renaissance society. 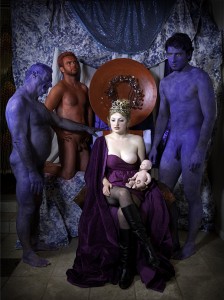 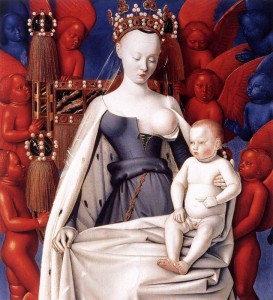 In my image The Annunciation, Madonna is shown reading a fashion magazine, a universal contemporary distraction that establishes the ‘expected’ way women should look. Even Gabriel, the angel, is caught up in the illusions, looking over Madonna’s shoulder at the magazine.

Ma Petite Pomme is a reference to Jean Fouguet’s painting, The Enthronement, which depicts a far too sexy Madonna surrounded by tiny plastic looking red and blue angels. In Ma Petite Pomme, the Madonna is similarly surrounded by figures, but nude adult males instead of cherubs that create a tension as she between Madonna and the blatantly exposed men reaching for her and encroaching into her space.  She looks away from the viewer and the baby, expressing her conflicting feelings of uncertainty, power and vulnerability.  Her expression is evocative of the same sentiments that contemporary women feel when confronting the the conflicting roles we are expected to play.” -Rose M Barron