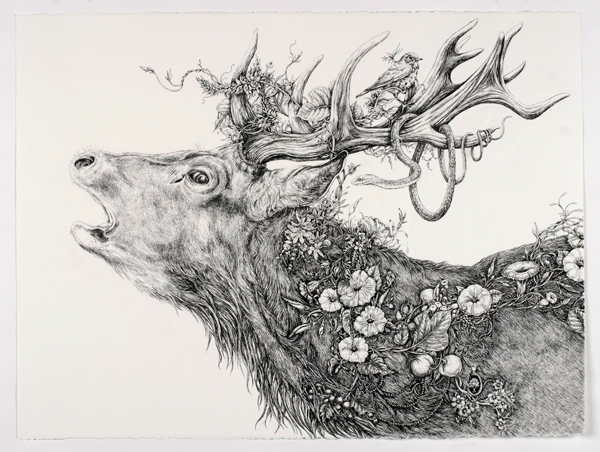 How appropriate that autumn is the season in which Laura Bell’s new exhibition, Run Rampant, appears at Whitespace. The evening of its opening, white-dark rabbit feet in a ceramic bowl were given like amulets to the partygoers, and as dusk passed into night, the wind outside chilled and dried. The weather’s tone was both strange and elegant—perfectly matching the work being studied.

Run Rampant, an artistic realignment for Bell, is an impressive, multimedia tableau vivant. Its diction is foremost Victorian, though invaded. One enters the gallery and, on the right wall, sees two intensely intricate pen and ink drawings of a stag and a boar. On the left, seven framed portraits of mammalian decay—the paper cut with an x-acto knife, then pinned behind glass. These initial works are hung against walls of dark mauve like insects pinned to felt.

In the second room of the gallery, Bell has installed lavender wallpaper. In a design reminiscent of steampunk, the single faces of opossums, pigeons, rats, wolves, and rabbits emerge through illusionistic frames crenellated with beetles, buds of flowers and tufts of grass, and pulsing cicadas and butterflies.

The exhibition has a marked interest in taxonomy and classification. Beneath the deer bust, a marble shelf protrudes from the wall, and on its surface one sees an egg with a round lacuna in its shell, which reveals a decorative figuration of an owl inside—this whole scene protected beneath a glass bell jar flanked with two animal skulls. These details that ornament the exhibition have the astute role of converting the gallery space into its own realm, a separate one, just as the animal world is, layered with its own secrets and rituals. Bell’s work, too, has secrets. A second viewing is almost imperative to capture pieces in their fullness of detail.

These are just some of the exhibition’s highlights, or at least the installations that are most prominent. While the project’s assemblage may behold the distance between our natures and others, never does Bell’s work feel emotionally detached from us. Its energy is palpable and amorous, like a dark European fairy tale. But there is something about the intenseness of the project’s cataloguing and observations (note the exquisiteness of the stag’s hair, quill-like) that also communicates fear. But I believe I am registering the ramifications of Bell’s study. To view her prickly work is to confront the possibility of a realm completely ungoverned by us, by our truths, even our hands.