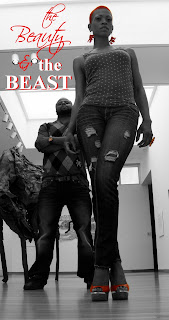 Whitespace is pleased to present The Beauty & the Beast, a one-night only spoken word performance by Tasha Jones and Tommy Bottoms.  Touching on topics ranging from drug use to politics, Tasha and Tommy provide a fast-paced  entertaining, and often humorous take on modern society and the gritty urban environment.

Both Tasha and Tommy are highly acclaimed spoken word artists who tour the United States and the college circuit with their shows.  Tommy Bottoms is a two-time HBO Def Poet, BET Lyric Café All Star.  He has also had two national appearances on the Black Family Channel and performed at the Royal Stratford Theater in London, England.  Tasha Jones is an Indiana Poet Laureate  runner-up and two-time Essence Festival Featured Poet.  In addition to performing, Tasha developed educational materials aimed at ending illiteracy and guides for Magic Johnson and other HIV/AIDS activists educating the public about the disease.