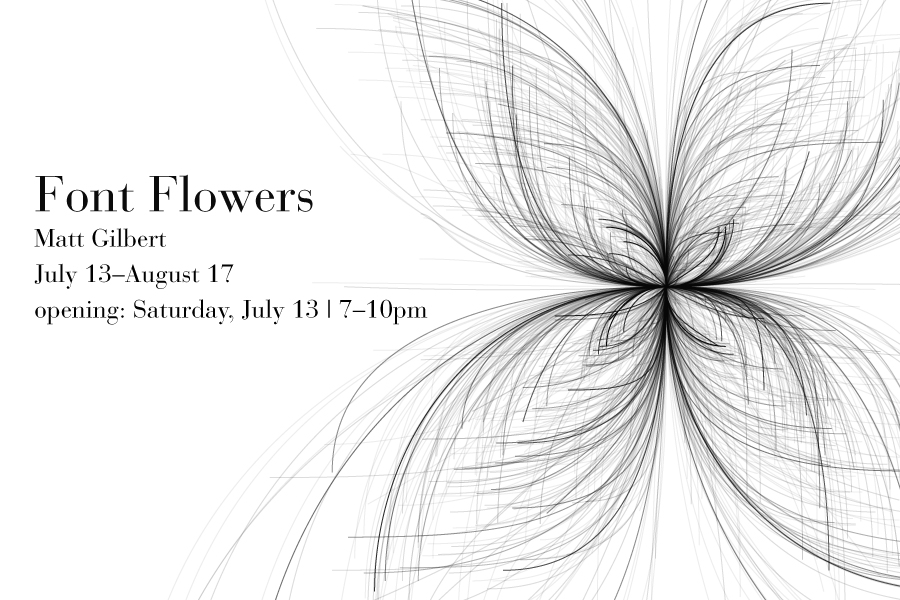 Please join us for the opening reception of “Font Flowers” by Matt Gilbert in whitespec at whitespace. The letterforms in a well-crafted font are deceptively simple. Font design involves an enormous number of small decisions that, in most cases, are intended to go unnoticed. Every shape and each adjustment to every curve affects the legibility, character, and overall visual impact of a font. In normal use, fonts support the content that they embody, without drawing too much attention to themselves.

For Gilbert, studying typography and font design has opened up a world of subtle visual decisions. His fascination with both the aesthetic considerations and the technical construction of fonts has spurred him to find a way to condense the letterforms of an entire font into one image, visualizing the font data in a way that focuses on the formal properties of all the shapes in a font simultaneously. The resulting shapes provide a perspective through an entire typeface as it is embodied in a font file.

In Font Flowers, all of the curved segments in a font are rearranged so that they radiate out from a central point. This visual experiment results in a complex pattern that reveals some overall properties of a font: proportional relationships, modularity, curve complexity, and evidence of the many minor visual adjustments made by the font designer. Font Flowers invites comparison between fonts from a new, abstracted perspective that is independent of the recognizable graphemes of the language.

Matt Gilbert is an Atlanta-based artist and graphic designer. He received his BFA from the Art Center College of Design, has completed graduate work in Human-Computer Interaction at Georgia Tech, and will be pursuing his MFA at the University of California Davis beginning this fall. Gilbert has exhibited across the southeast including Aqua Art Miami Beach, The December Show and Unless and Until at whitespace, as well as Gladdening Light in Winter Park, Florida. He was awarded a Surdna-funded artists residency at the South Carolina Governor’s School for the Arts and Humanities, a Summer Undergraduate research Fellowship at Cal tech and was a semifinalist for the NSF Science and Engineering Visualization challenge in 2007.