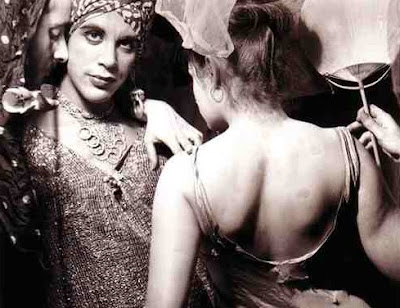 FIRST PROGRAM
Friday March 27, 9 pm
“Is My Brain a Germ or a Disease”
The Underground 60s
{featuring a screening and discussion of “Jack Smith and the Destruction of Atlantis” by Mary Jordan (2006)}

Mary Jordan’s award-winning documentary traces the life and times of the revolutionary artist and filmmaker Jack Smith whose best known film Flaming Creatures (1963) is widely considered among the most influential underground films ever made. Utilizing a mixture of rare archival material and interviews with important artistic and cultural figures of the 60s (and beyond), Jordan produces a riveting portrait of both the man and the milieu.

SECOND PROGRAM
Friday April 3, 9 pm
“Ready for My Close Up”
The Cinema of Guy Maddin

Canadian filmaker, Guy Maddin, is know for recreating the look and style of silent era films and is likened to the early films of director David Lynch. Best know for his feature film in 2003 “The Saddest Music in the World” starring Isabella Rossilini, Maddin has directed many short & feature films over the past two decades.

With a Janus-like vision that encompasses the history of cinema while simultaneously expressing a startlingly new and intensely personal narrative technique, filmmaker Guy Maddin has singlehandedly redefined the meaning of underground film at the beginning of the 21st century.

{featuring a discussion and excerpts from their films.}

Convulsive, controversial and strictly over-the-top, the works of both Richard Kern and Nick Zedd have long been considered the sine qua non of in-your-face filmmaking. Not for the faint of heart nor weak of stomach, this is film for connoisseurs of the dank and the dangerous. Frankly and stankly erotical.

Brad Lapin is a self-described gentleman of letters , Los Angeles born and bred, who currently divides his time between Atlanta, GA and Rome, Italy. He is currently working on a novel entitled “The Man Who Invented History” which has absorbed his attention for the past decade. In past incarnations, he has, among other things, been a radio show talk host, a theatrical director, an author, columnist and journalist as well as the publisher, editor and founder of both Damage Magazine and Pug, an E-zine. A raconteur, round-table wit and all-around permanent absurdity, Lapin remains dedicated to the proposition that, all things being equal, diamonds are a girl’s best friend.