No Outsiders: The 2019 Atlanta Biennial at Atlanta Contemporary
March 15, 2019
Burnaway.org
By Maura Callahan

Every year, more cities mount biennials. Over a century of variations on a similar theme, and the purpose of this recurring model remains unclear—beyond, perhaps, attracting cultural tourism, and, in some cases, fueling the fires of nationalism or regional identity. These exhibitions are known to elevate the visibility of emerging and mid-career artists, but as a curatorial format, the biennial rarely yields stronger results than any other group exhibition. Read More.

The American Music Show was a weekly public-access television show produced in Atlanta from 1981 to 2005. Its inclusion in the city’s biennial is characteristic of the loose, improvisational, and ambitious exhibition of twenty-one artists from the Southeast. Read More.

Amy Pleasant’s Writing Pictures and Hannah Israel + Sarah Hobbs’ A Handful of Dust, both at Whitespace through October 28, are ways of categorizing things in order to make sense of them. In both cases, the sense being made is far from obvious, but the beautiful elusiveness of the art objects is intellectually and emotionally seductive. Read More.

One of the great obstacles to having an innovative creative practice can be a reticence on the part of the artist to step out of their signature style. Having found an iconography that resonates with viewers, collectors, or curators, artists can become trapped in a tendency to simply repeat variations on a theme throughout their careers. Fortunately, Amy Pleasant is not such an artist, and her exhibition at the Mary S. Byrd Gallery of Art at Augusta University, curated by Shannon Morris, is a study in how to effectively explore a range of media without creating the impression that your practice has become compromised. Read More. 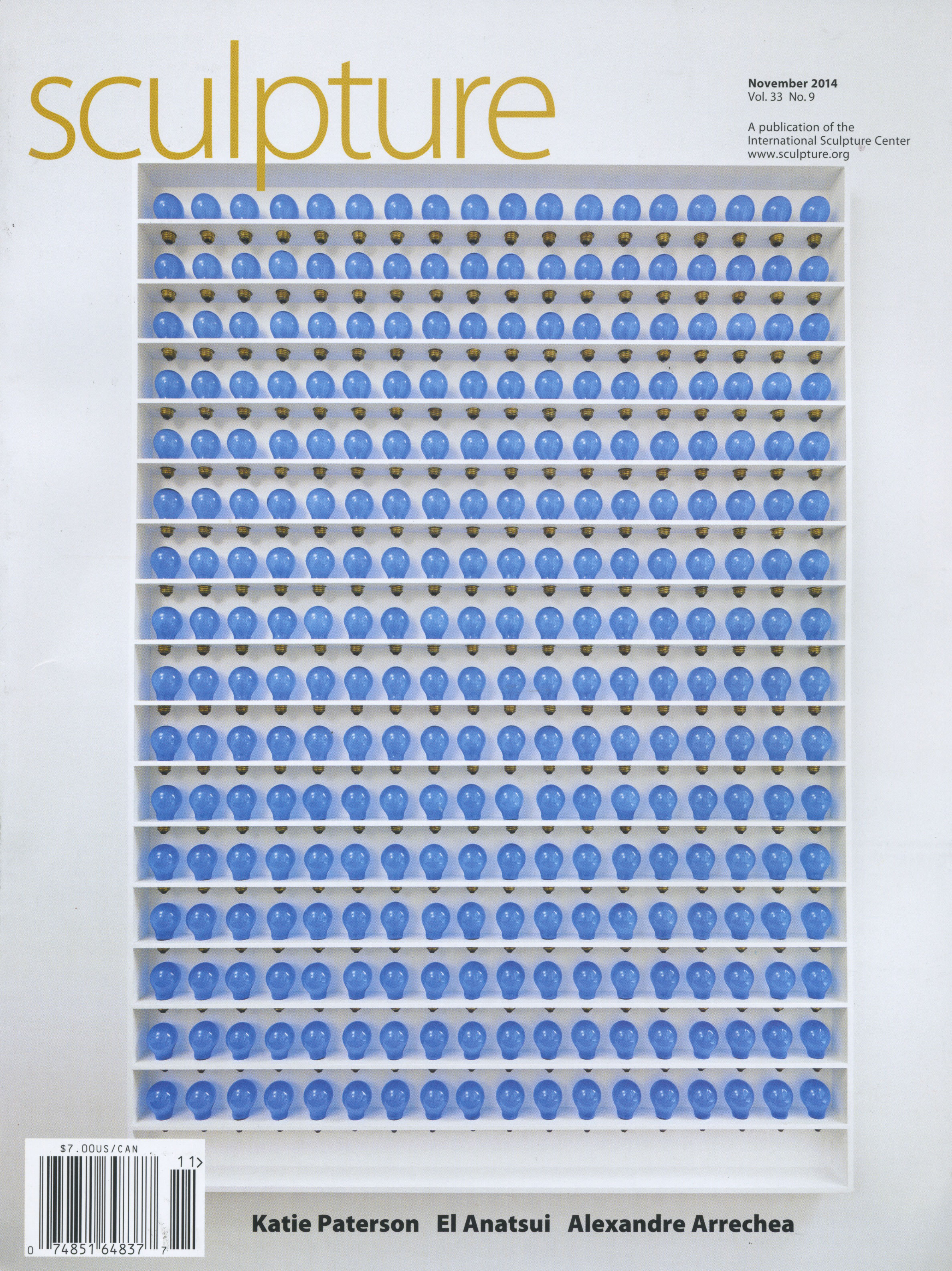 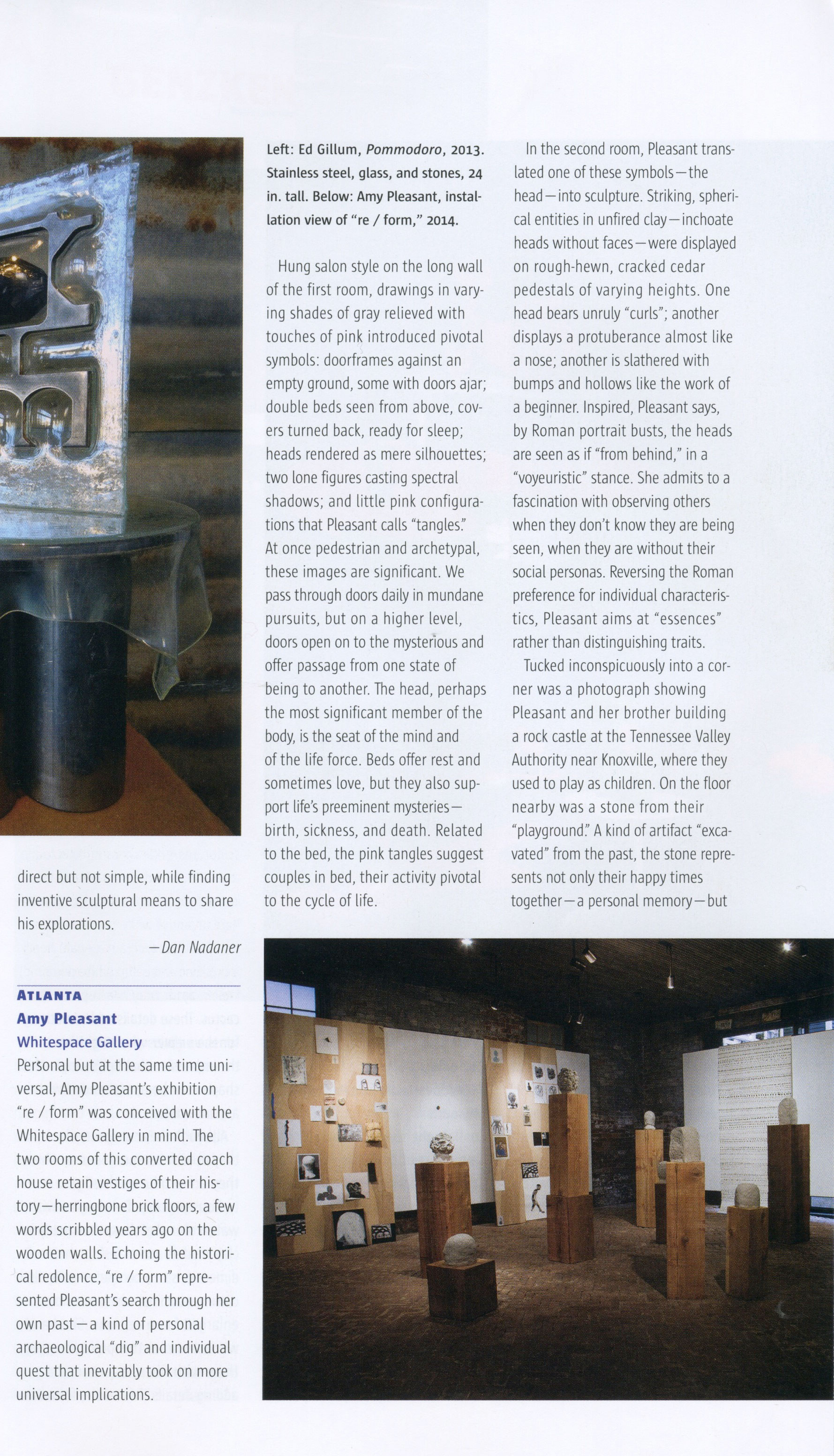 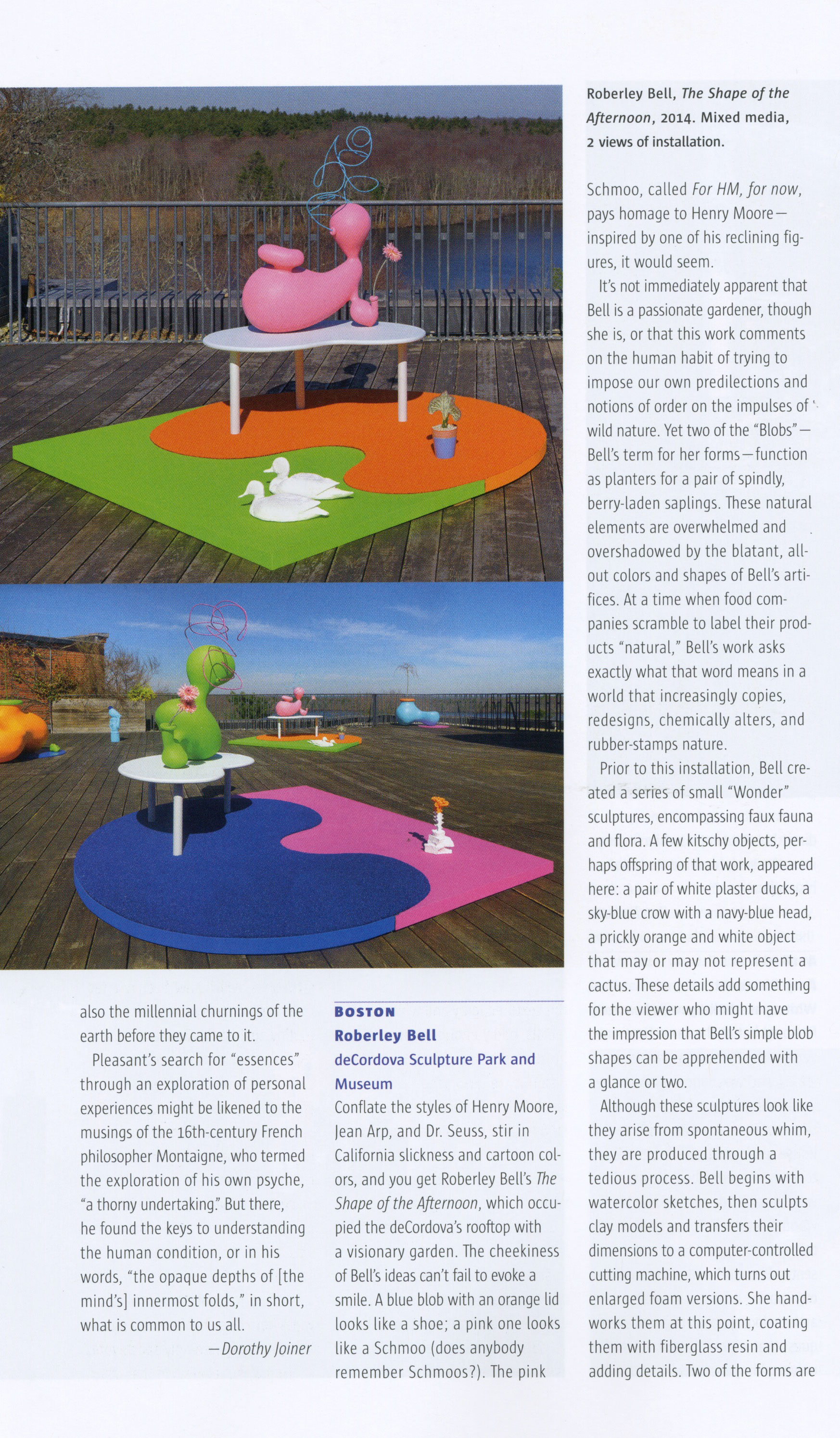 Amy Pleasant’s exhibition “re/form,” at Whitespace Gallery through February 15, presents a lineage of human history and responses to issues of identity, from ancient to modern times, caused by weighing one’s role in society against one’s place in nature. As she elaborates in her artist’s statement, this exhibition “invites the audience to consider how the history of the figure in art has shaped our understanding of the human experience.” Read More.

Amy Pleasant’s archaeology of her own past; Pete Schulte’s meditative drawings, at whitespace
January 28, 2014
ArtsAtl.com
By Donna Mintz

Amy Pleasant continues her exploration of archaeology and how the human figure in art history has shaped our understanding of the human experience in re/form, a thoughtful show of new work that fills Whitespace gallery with drawing, painting, sculpture and personal artifacts through February 15. Read More.

Recently I went to visit the talented and always affable Amy Pleasant in her studio, located in historic downtown Birmingham. Pleasant, who just turned 42 in October and has been painting for more than half her life, is probably best known for her “storyboard” canvases: constellation-like compositions that chart simultaneously mysterious and mundane narratives. Amy also does drawings on paper, wall drawings, and recently an installation of what she terms three-dimensional drawings. Read More.

“My parents put me in art classes with a woman named Thelma Pritchett when I was 4,” Pleasant says. “We did sculpture, print-making, watercolors, drawing, everything. And at 5, she got me a space at the YWCA. I still have my autograph book with everybody who came and signed it.” Read More.

I’ve spent a lot of time thinking about the lines that Amy Pleasant uses to define tiny human dramas — or rather, big human dramas rendered on a relatively small scale. My first encounter with her work was back in 2004, when the Birmingham native was one-third of a three-woman exhibition titled “BAMA,” held at Space One Eleven. For her part, Pleasant embarked on her first site-specific wall drawing, turning an empty room into a full and busy universe with dozens of tiny illustrations of ordinary human interactions.

Fast forward five years and she’s at it again, only this time, the empty space she is defining with drawings is almost as big as the sky. “Suspended,” a newly commissioned wall drawing at the Birmingham Museum of Art (BMA), wraps the four walls of the museum’s Lower Sculpture Garden. Pleasant executes a “cloudscape” using black exterior paint directly on the garden walls, creating an outdoor gallery space. Several sculptural works extend the cloudscape into three dimensions to the center of the outdoor gallery.

The human dramas depicted in the artwork depend on who shows up to see it. In what marks a departure from almost all of Pleasant’s previous work, there are no figurative images in “Suspended” — at least not until real, live people are walking within the walls of the garden, among her carefully created clouds.

This week, when the output of a few real clouds had compelled Pleasant to come inside, she talked to me about the process of creating “Suspended,” which is scheduled to open Dec. 17.

BIRMINGHAM WEEKLY: The last time we talked was in December 2004. Your part in the “BAMA” exhibition at Space One Eleven was titled “Constellation,” and in describing it to me, you called it “a map of space in reverse.” With this new work, you’re back in the sky, albeit in a different way. What got you interested in creating a “cloudscape”?

AMY PLEASANT: Flying home from a trip, I was looking out the window from a plane. I began wondering how many people have this exact same experience — looking out of the window this way, with the clouds all around you, you’re suspended in them, and there’s a sense of depth. There’s a certain euphoria in that moment of flying, at least for me. You’re elevated above life in what you think about and how you perceive and experience yourself in that space

I went home and made a drawing, and what I was trying to get at was that sense of deep space.

And how did that drawing become this museum project?

Ron Platt [the BMA curator of contemporary art] came to me two years ago and said he really wanted to do a wall-drawing project. He had seen my work, both in shows and in some things I had done for private collections. We discussed several possibilities, but nothing ever fit, at least not inside the museum. Eventually, he suggested the sculpture garden, and the first time I walked out there, it was a no-brainer.

You noted in the official description of the piece that it was your first wall drawing “with the absence of a figurative image.” I loved the language you used — as if one of the best ways to describe “Suspended” was by explaining what it didn’t have. Was it intentional? I mean, did you set out saying, “Now I’m going to do a piece without a figurative image,” or “Now I’m going to draw big instead of small.”

What’s interesting, formally, is that my work has always been about “the mark” — the black mark, the black line, the kind of graphic element that is different from fluid. Working on “Suspended,” the shift of scale has made me question “the mark.” The little drawings are gestural. Once it becomes gigantic, I create it differently. When you examine the line at that size, you view it in a very different way.

Suspended also marks the first time that you’ve integrated a three-dimensional element into a wall drawing project, but since I haven’t yet seen the work in progress, I’m not sure which 3-D element you were referring to. Is it the gravel pit, the Sol Le Witt work, the actual sky or all three?

Actually, I was talking about a sculptural element of my own. I created clouds that you have to walk through, that you interact with in the space. But I don’t think of them as sculpture. I think of them as drawings in space. I wanted the drawings to be extracted from the wall, and I wanted to create an environment.

It’s like a rudimentary stage set. You have a sense that you’re in the clouds. For me, they’re cut, black metal lines. Not sculpture but lines.

Another thing you told me in 2004 was that you considered yourself a painter foremost. You said that drawing had always been an integral part of your art-making, but prior to the “BAMA” exhibition it had never been a part of the work you showed. You said, “I feel like I’m bringing my studio practice into the show… Drawing is really the guts. My paintings are all about drawing.” How is drawing a part of your larger body of work now?

I call myself a painter because it was my first true love. When I make a painting I love, there’s nothing else like that. You can make drawings all day long, but in a way it’s so limited compared to painting. At least for me. But all of my work is based in drawing.

Did you draw on the walls as a kid? Did it ever occur to you that you would do it for a living?

My parents let me do whatever I wanted in that respect. I decorated my windowsill. I painted a Picasso painting on my bedroom door. In 1986, my father went to a Picasso retrospective and he bought the big book and brought it home. I was just fascinated by that book. I started copying his work. I made drawings. I did paintings. It was all Picasso and I was just absorbing it.

I draw on the walls of my studio, too, even now.

When I make wall drawings, I love the temporary aspect of them. You have this experience and it’s temporary. You create this work, and it’s there for awhile, and once it’s gone, it can never be recreated.

Do you think the sky something you return to again and again in your work?

A man I loved dearly when I was growing up, I can remember him saying, that the problem with people is that we don’t sleep outside anymore. He would say, “All the rulers of the world need to sleep outside or have a house with no roof.” I think of that all the time. I think his idea was — or my idea is — that seeing the sky, the vastness of it, helps you to keep in mind your own insignificance. Ego gets away from us all. The things that happen in our lives are so incredibly important, but on the scale of everything that is happening to everybody everywhere, they’re insignificant and important, too.

You sound elated when you talk about this work. Maybe it’s cliché to suggest that you had a breakthrough –

I actually do think I had a breakthrough. I spent a couple of years making work that wasn’t challenging me, and I actually had a kind of breakdown in the studio. I had reached this point where I didn’t understand what I did anymore.

There’s a quote from Phillip Guston that’s really important to me: “I just wanted to know what it looked like.” He was talking about a painting he did called The Cellar, where he had drawn all of these people jumping into a hole. The painting is all these legs and feet and this hole, and when somebody asked him why he had done it, that’s what he said. I think maybe that’s what all artists do. They say, “I just wanted to know what it looks like,” and they make it.

I had no idea what this piece would do. I had this little drawing that I made after I’d been on a plane, and when I had the opportunity, I just wanted to see what it looked like.

Last year, when I began working on the piece, those clouds were heavy. It was somehow about rain and storms. But now, I’m grounded and the piece has elevated me at the same time. I think everything’s clearing.