Teresa Cole shares her inspiration for Curling in on Itself, the installation centerpiece of her current show Between Origin and Present running through June 30 at whitespace. 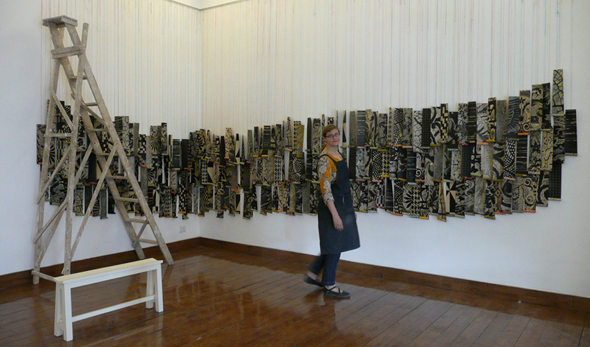 Background on the Making of Curling

“Despite its accessibility ornament [or pattern] is not a universal language. Like a spoken language it has many different ‘families’ and innumerable local “dialects’ and ‘idioms’ often mutually incomprehensible.”

In 2002 when my colleague Dr. Michael Plante approached me regarding an exhibition he was curating called New Orleans Pattern and Decoration (NOPD) I had not realized how much pattern has infiltrated my work. For his exhibition I created an installation entitled Protection that was based on the security patterns from the insides of envelopes. Thus began my conscious exploration of pattern, and the consideration of the origins and meanings behind various patterns.

When I had the opportunity to first travel to India in the fall of 2007 I went on a quest to discover the origins of patterns. Needless to say, my work with pattern exploded after that research trip. So when I was invited to participate in an exhibition in Kolkata, India for January 2010 I jumped at the chance to return. The exhibition curated by Dr. Paula Sengupta entitled Stains on My Chintz included the work of 6 women artists from across the globe and explored issues of colonization and the effects of cultural cross-pollination caused by colonization.

Fortunately, the month prior to the exhibition I was granted a residency with the arts organization Khoj Kolkata and was able to create work on site for the exhibition. My plan of attack was to print state side, patterns from my stockpile of hand carved woodblocks on very thin Japanese paper, carry them with me on the plane and back them all with cotton or silk sari fabric once in India.

On my first visit to Kolkata in 2007 some friends organized for me to meet a traditional Bengali folk painter, called patachitra painting. The visited consisted of this gentleman and his niece showing paintings and signing to accompany the narratives. All were hand painted long thin scrolls backed in saris exploring themes of creation, folk tales or epic dramas he even had scroll of the Ramayana. On closer examination of the works I noticed how the fabric backing gave strength to the scroll but also added a fantastic dimension to the painting.

My piece Curling In on Itself evolved from there. The images depicted show the gluing of the prints onto the saris, then the trimming out and hanging of the work as it was installed at the Harrington Street Art Centre in Kolkata, India. 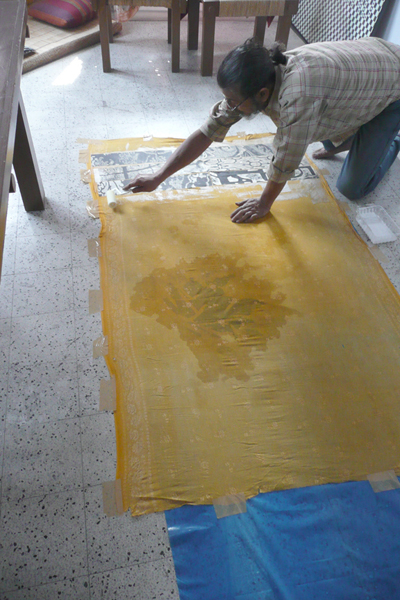 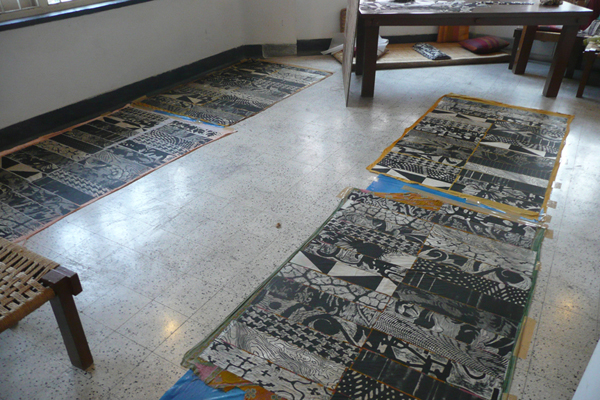 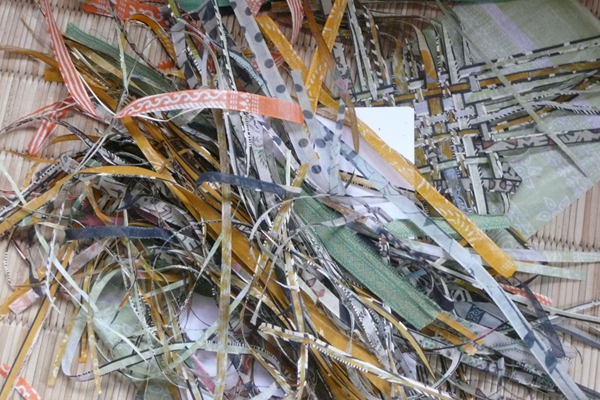 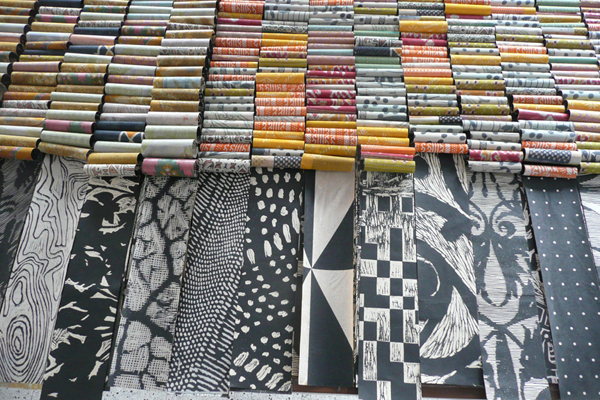